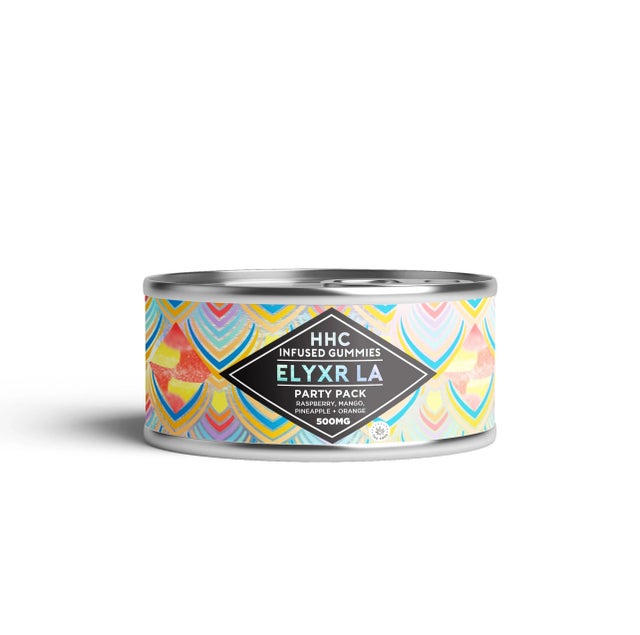 
Suggested serving size: 1-2 per gummies as needed. Start slow with a half gummy and then wait an hour to see where you are effects wise and the can take more if desired, make sure to wait an hour before adding to your serving.


What is HHC?
In the last few years, the popularity of hemp-derived cannabinoids has exploded. Some of the most popular varieties include delta-8, delta 9, delta-10, THC-O, and Hexhydrocannabinol, also known as HHC.


Cannabis strains often contain trace amounts of HHC, meaning that this cannabinoid can be classified as a natural cannabinoid. To increase the potency of HHC in concentrates, processors must use methods similar to those used to make high potency delta-8 concentrates such as chemical derivatization. In practice, most HHC products can be considered semi-synthetic due to the small number of chemical alterations needed to reach the end goal.


An American chemist named Rodger Adams is credited as the first person to synthesize HHC in 1944. Adams made HHC by altering delta-9 in a process known as hydrogenation. In hydrogenation, hydrogen atoms are added to the molecule to remove double bonds. This process helps to stabilize the molecule, resulting in the most stable form of delta-9. One cool effect of this is that it has a significantly longer shelf-life than other cannabinoids.


Given the current cannabinoid marketplace, most processors first convert hemp-derived CBD to delta-8, then proceed to convert the delta-8 into HHC. Vendors of HHC now offer it in the form of vape cartridges, edibles, tinctures, and many others.


To make a long story short, HHC is a very similar cannabinoid to delta-9 THC and is almost identical structurally. A main benefit of HHC is that it’s not federally illegal, similar to delta-8 and that it has a similar potency to delta-9, meaning that it’s typically stronger than delta-8.


Benefits of HHC
So, why do people prefer HHC to other cannabinoids?
Delta-9 similarity- HHC is thought to work in the body similarly to delta-9, which means that it is more potent than delta-8 and delta-10. While its effects are similar to delta-9, HHC has two forms known as enantiomers. The two enantiomers are known as 9α-HHC and 9β-HHC. Of the two enantiomers, 9β-HHC is much more psychoactive due to its stronger binding with receptors. Any HHC product will be a mixture of both enantiomers, as separating them from each other is very difficult and would not be practical to perform at a bulk scale.

There are a wide variety of reasons that people consume delta-9 and HHC alike, so whether you are looking for relief from pain or stress or you are just looking to relax and enjoy your weekend, HHC offers an alternative that is more potent than delta-8 and that is federally legal, unlike marijuana derived delta-9.


How is HHC Different From Delta-9?
While HHC was first made by hydrogenating delta-9, it’s now more frequently made with hydrogenated hemp-derived delta-8, which is much lower in THC. This means that HHC is not quite as psychoactive as delta-9, making it a lighter, and less psychoactive weed option.


Is HHC Legal?
Another way that HHC differs from delta-9, is that it is technically federally legal if processed a certain way, under the 2018 Farm Bill. As always, make sure to check the specific cannabis laws in your state, just to be safe.


Additionally, although HHC is legal, it doesn’t mean that every HHC product is safe. Some cannabis companies use low-quality concentrates, or even cut their products with foreign substances. It’s important to be in the know about what’s in your products and only buy THC products from companies that you trust.

Is HHC Safe?
As a naturally-occurring cannabinoid, cannabis users have been consuming HHC for hundreds if not thousands of years. Although, it’s still important to keep in mind that the long-term effects of almost any trace cannabinoids are not currently well known, although the effects of long-term marijuana use are being researched. Following traditional logic from structural biology, HHC is likely to have very similar long-term effects to delta-9, indicating it is probably one of the safest hemp-derived semi-synthetic cannabinoids available today.


Will HHC Get Flagged on a Drug Test?
In theory, yes. But, let’s go over the science. The alterations made to the molecular structure of HHC could potentially avoid detection on the gold standard urinalysis drug test (known as gas chromatography-mass spectrometry) due to its differing mass, but you certainly shouldn’t bet your job on it. Many HHC concentrates can contain precursor molecules that could still trigger false positives. Additionally, less conventional analysis methods may not be able to differentiate between HHC and delta-9, also potentially flagging a false positive.
Add to Cart